Ah another Jewish New Year has come and gone! This time the holidays were four days of bliss and as always it was a grand celebration. Lots of preparation and excitement and let’s not forget the tasty, elaborate and authentic dishes. Everywhere you visited there was food in great quantities, people ate non- stop, it went on and on and on……

With that being said I must tell you I felt like I was in a detention centre. Yes, a DETENTION CENTRE! Ha! Ha! Ha! My punishment if I refused to eat was long drawn out faces along with impatient gestures and in some cases even verbal attacks. “Why don’t you eat? I made this special, you should try it. It is a family recipe!” Believe me, people get so personal with their cooking that it gives you a false sense that you are special and it was done all for you (if only).

Last year December for the Christmas/New Year I wrote a blog titled “A Lifetime Gift to Ourselves.” It was also about food but this time I could not resist writing about my four traumatic days of trying to be spoon fed by adults. It was rather comical. Why is it that others cannot accept when someone says I had enough to eat and to respect that person’s wishes? 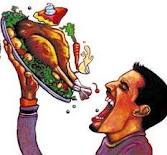 Talking to a friend about it she said, “You know it is a Jewish tradition. Everything we do is centered around food and in each Jewish family there is the Yiddish mama who wants to feed you and make certain that you are full.” I told her where I came from it is the same.  It is a worldwide tradition to celebrate the festive seasons with tasty drinks and eats and that is all good but we do not need to get carried away by our eyes let alone someone whose pushing you to do what they believe is a good thing. Because should you see that same person in a few weeks they would be the same ones to say, “Have you put on a little weight?”

Mind you I am not mad about the events that took place over the holidays just bowled over in a hilarious way.

To make up to those of you who had your four days of overindulging a friend and I came up with this idea which we are seriously thinking of doing – a 1 Day festival of only salads! How about that? At least we all can have a celebration of greens plus more green…lol!

So what do you think?

Let us do it! A Salad Festival!

Send me some suggestions of dates and it’s on.

Pass the FANGA on:

As a prolific vocalist I have spent many years crafting and developing my talent to reach my present point. Although I still have a long way to go I am truly grateful for the energies and blessings that the universe has poured into my life. And despite all the difficulties and challenges faced I am excited to share this journey with you....FANGA!
View all posts by hsfanga »
« The 3 Types of Friends.
For What It’s Worth…. »

Inspiring, reflective, stimulating are just some words to describe what HS FANGA blog is all about. Time to find that FANGA within you!

Hillary Sargeant FANGA! The Power in Ya